SurgiWrap®  Bioresorbable Adhesion Barrier film is used as a protective barrier to prevent the ingrowth of scar tissues and subsequently prevent adhesion between opposing tissues.

SurgiWrap®  Bioresorbable Sheet’s polymer material is fabricated from the same lactic acid molecular building blocks which occurs naturally in the human body. The polymers, which result from lactic acid derivatives, are generally referred to as PLA or polylactide.

The SurgiWrap® Bioresorbable Sheet is made from an amorphous bioresorbable copolymer of 70:30 Poly(L-lactide-co-D,L-lactide).

The 0.02mm and 0.05mm sheet retain significant tensile strength (greater than 80% and 100%, respectively) for the initial 8 weeks, and decreases in a controlled fashion through 24 weeks of aging. Independent laboratory testing determined that the SurgiWrap® Bioresorbable Sheet was capable of maintaining an impermeable sheet throughout the critical healing period, which has been described as several hours for soft tissue attachments and up to 8 weeks for reinforcing weak tissues. 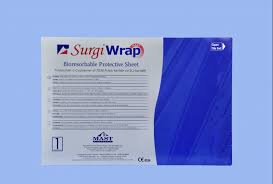